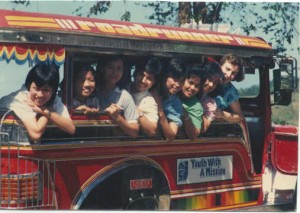 The first YWAM team to visit the Philippines was led by Jim and Jan Rogers in December 1968. They stayed two months and witnessed in Manila and on the island of Mindoro.

Two years later, Ross & Margaret Tooley brought in a team called the Asian Circle Team that witnessed for two months in Manila and throughout parts of Mindanao.

At the conclusion of that Asian Tour, Ross & Margaret’s team returned a year later in December 1971.

YWAM has continuously been in the Philippines ever since.

Ross and Margaret and a team (including Graeme Jones) then ministered in Davao for many months while Kel Steiner and a team worked in Luzon.

In 1972, Kel and Mike Shelling started the YWAM BAGUIO Base before Kel returned to his native New Zealand in 1973.

During this time, Ross Tooley served as National Director of YWAM Philippines based in Baguio.

These were the days when Ross and Margaret, Graeme and Mary Jones, Helen Coromina, Angie Parsons, Virgie Chumalan, Barbs Calo, Jackie Schori, Mike Shelling and Janice Syntelien (later Janice Shelling) and many others all worked together.

The YWAM Team evangelized constantly among college students and ran an effective student center with very good results. Many Filipinos from this time are in full time Christian service today or are productive Christians.

From Baguio, teams crisscrossed the Philippines in outreaches and in preaching assignments. They also promoted Christian movies in secular theaters throughout the archipelago. These exciting days are chronicled in Ross Tooley’s book “Adventures in Naked Faith” (“Walking in Water in a World of Unbelief” in the Philippines).

Discipleship Training Schools (DTS) were started in Baguio as well as a preschool.

In 1979, Graeme and Mary Jones started a YWAM Base in Davao.

Jackie Schori started a YWAM work in Abatan in 1981.

Although YWAMers had worked on outreaches in Manila for years, 1983 marked the beginning for a permanent YWAM work in the metropolis, pioneered by a creative ministries from Honolulu.

At this time Kel Steiner returned to the Philippines and assumed the national directorship while Ross & Margaret moved to YWAM Hawaii.

The National Headquarters shifted from Baguio to Quezon City while the DTS moved to Antipolo.

Jeff Romack took over leadership of YWAM Baguio and the ministry to the students and the pre-school ministry continued. A mercy ministry started and ministry to mountain people intensified.

During the next three years, six more ministry locations opened in

Metro Manila, Olongapo, Surigao, and a further base in the Mountain region of Northern Luzon while the Abatan base moved to Bontoc.

In addition, a number of indigenous churches were established among:

Squatter Communities in Metro Manila, Tribal People in Baguio and Villages in the Cordillera mountains.

After the period of 1983-86, YWAM Philippines underwent a period of consolidation after the rapid growth while the country was hit by the Baguio earthquake, increased typhoons and attempted coups against the Aquino administration.

WHAT is Youth With A Mission (YWAM)

History of Youth With A Mission (YWAM)

Our Purpose, Beliefs, and Values

Read Our Purpose, Beliefs, and Values